Newsletters > On Our Minds

Could it Happen Again? The Fate of the Other Russian Musicians 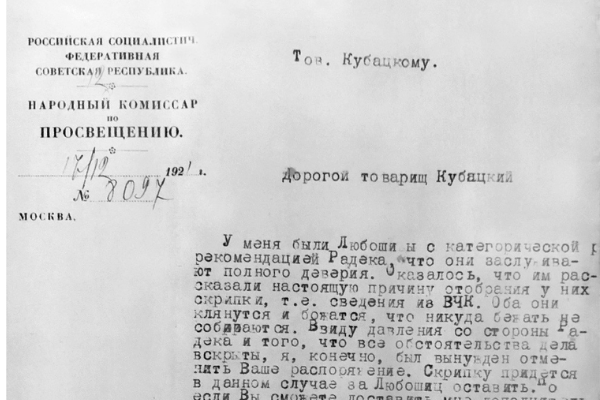 During the present crisis in the Ukraine, much has been made of the fate of Russian musicians who are supporters of Vladimir Putin. Superstars like conductor Valery Gergiev and soprano Anna Netrebko are being shunned by musical organizations and venues around the world.

But what of the countless other musicians who have to live and work in an increasingly repressive, isolated, and economically challenged country? Most of these are not Putin sycophants and many are opposed to the war. What is likely to happen to them, especially if pressure is exerted to demonstrate their loyalty to the regime and demonize the West, where many of them have important professional contacts? What if they can no longer support their families or if living and working conditions become unsafe? The longer the crisis continues (and it is likely to continue well beyond a timely end to the war) the more difficult their lives could become. And if life gets increasingly intolerable, will more of them try to emigrate? Will they be able to do so if freedom of movement becomes restricted? Will they be welcome in the West, where the professional lives of many musicians are economically precarious?

I have thought about these questions a lot in recent days in the light of developments in Russia a century ago. Many musicians fled the country and remade their lives outside of their home country after the revolutions of 1905 and 1917. Indeed, Western Europe and the Americas were flooded with Russian musicians to a truly transformational extent. Those lucky enough to flee with their families intact, with some valuables (including musical instruments) with which to begin anew, were often able to enjoy great success artistically and economically. For others who waited, families were separated—in some cases permanently—and the struggles to remake musical careers were more challenging. And for still others, as borders were closed, there was no possibility of leaving the Soviet Union. Emigration essentially became impossible for half a century or more.

It can be excruciating to give up one’s homeland and the decision to do so is especially difficult when the future is unpredictable. The reasons to do so vary. For my grandmother Lea Luboshutz, a Russian violinist (appropriately, given the present crisis, from Odessa) who enjoyed fame and riches in Russia up until 1917, it was a wrenching decision. Indeed, she waited until 1922—too late for an orderly departure from Moscow where she was then living with her three children and their father. After the Revolution of 1917, she had tried to maintain as much of her lifestyle as she could (just as many Russian musicians are doing now). She supported the family by playing concerts, many in factories and other non-traditional venues, as prescribed by the Bolsheviks. But food was increasingly scarce and bribes often were the only way to secure essentials like milk for her infant daughter. The father of her children, Onissim Goldovsky, was what today we might call a “dissident” who had supported a liberal democratic party and was being harassed by the Soviets. He was told that they would have to share their apartment with another family, which soon became crowded with strangers. The elevator no longer worked and drinking water and food had to be carried to their fifth-floor kitchen. Even so, Lea waited. One wonders why. But it was unclear to her whether things would get better and whether life would return to some semblance of normal. Trying to predict the future is always the danger, now as then.

What precipitated Lea’s hasty and permanent departure from the Soviet Union? In her case, the reason was simple: the potential permanent loss of her violin. That was the straw that broke the proverbial camel’s back. She owned and played a fine Italian violin made by Nicolo Amati in Cremona in the 17th century. It was her primary concert instrument and was quite valuable. More important, it was that on which her livelihood depended.

By 1920, the new Soviet government became alarmed that so many musicians who were emigrating from the country were taking valuable instruments like Lea’s Amati along with them. The instrument drain was depriving the country of important violins, violas, and cellos and it was all the more frustrating to the authorities that these instruments were enabling émigrés to build new lives in their adopted countries by selling them and raising cash in order to live. The Bolsheviks consistently blocked people’s attempts to take valuable resources in any form from the country and they soon realized that rare instruments were a source of capital. So, as an extreme measure, the government began confiscating instruments belonging to people who might be flight risks, taking these possessions from their owners and turning them into state property. In 1922, state officials unexpectedly came to Lea’s apartment and took her Amati. It is such unexpected and seemingly minor events that can convince someone it is time to leave.

From the government’s point of view, targeting my grandmother’s violin made perfect sense. Onissim Goldovsky’s political views were well known and did not align with those of the Bolsheviks. People like him were targeted by the new regime and many had already fled the country. Others were jailed or executed. If he fled, Lea would surely go with him. Besides, her prominence as an international artist would make it possible for her to establish a career abroad without the kind of privation she was experiencing in the Soviet Union and her violin was essential to such a course. By contrast, the valuable Guadagnini cello belonging to Lea’s sister Anna was not targeted by the State. Anna and her physician husband were honored citizens of the new regime and lived in relative comfort. They were clearly not a flight risk.

One can only imagine the shock my grandmother experienced when her violin was taken from her. A musician’s relationship with a great instrument is unique and special. The permanent loss of her violin would be devastating, especially as she had secretly been planning a concert tour of Germany. Even if she could get her instrument back for that tour, there was no guarantee that officials wouldn’t change their mind when she returned and this contributed to her decision to leave the Soviet Union when she did. But she could not depart without the violin.

As always in Russia, then as now, a great deal depended on whom you knew. The family had an important friend—a certain Anatoly Lunacharsky, who served as the first Commissar (Minister) for Education and Art under the new government.

The family was connected to Lunacharsky in several ways. One was through the American dancer Isadora Duncan, who had set up a school in the Soviet Union with Lunacharsky’s support. Lea’s brother Pierre and her son Yuri both played piano at the school, and Pierre was piano accompanist for Duncan when she performed in Russia. There were other connections through Lea’s musician colleagues.

In a letter dated 17 December 1921 and marked “Top Secret” (and actually displayed by the Glinka Museum in Moscow in 2020 in an exhibition devoted to important musical instruments), Lunacharsky wrote to Victor Kubatsky, the Commissar of the State Collection of Unique Musical Instruments, which he had helped to establish just two years earlier. It was he who had jurisdiction over Lea’s violin. Lunacharsky wrote that members of the Luboshutz family had appealed to him, explaining that Karl Radek, the Vice-Commissar for Foreign Affairs, would vouch that they could be trusted, that they would not emigrate abroad with the violin, and that they were reliable people. He urged that Lea’s Amati should not be taken from her because there was no way, given all the publicity surrounding the instrument, that the family would risk leaving the country with it. Ironically, this was precisely the moment that the family had decided to do precisely that. Luncharsky blamed the Cheka (the first Soviet secret police organization) for initiating the action which, based on the evidence, should never have occurred.

Lunacharsky’s letter got immediate results. A day after the letter was sent, Lea received a telegram from him (a copy of which is also in the Glinka Museum with her signature acknowledging receipt) stating that The Committee for the Protection of the State Collection of Musical Instruments was requesting that she show up at their building “at 11 o’clock on the 22d of December.” By noon on that day, she had her violin back.

Anxiety was mixed with joy however. How long would this happy state of affairs last? Lunacharsky was but one official among many. Just as is true today, policies of all kinds were being developed and then abandoned, with new ones replacing them as officials changed. An agency headed one day by a friend could, the next day, be headed by an enemy. Who knew how long the violin would remain in Lea’s hands? Indeed, even in this letter, it is not at all apparent who was behind the actions being taken and there were caveats about revisiting the case if necessary.

Soon after the letter was sent, Lea and her young son, my Uncle Boris Goldovsky, secretly left for Germany with the violin and they never returned. Boris, though only a child, could serve as my grandmother’s accompanist in the new country as she gradually reinstated her career.

But because the departure had been so hasty and had occurred in secret, there was little time to plan next steps. Onissim, Lea’s two other children, Lea’s parents, as well as her brother and sister were still in Moscow. It was up to them to figure out what to do. Onissim’s unexpected death a few months later made a chaotic situation even more dire. And though some of the family were eventually able to reunite with Lea in Berlin and later Paris, others (including her eldest son) never did. For them, communication with relatives in the West became increasingly dangerous and by 1935 ceased altogether. It would be more than a half century later, long after Lea’s death, that the family would be able to reunite.

Lea’s story is but one among hundreds of thousands. One can only hope that the difficulties facing musicians in Russia a century ago will not be repeated for those who are in the country today and that their challenges will be short-lived.